On July 5, the Ministry of Industry and Information Technology, the Ministry of Finance, the Ministry of Commerce, the General Administration of Customs, and the General Administration of Quality Supervision, Inspection and Quarantine jointly issued the "Announcement on the Average Fuel Consumption and New Energy Vehicle Points of Chinese Passenger Vehicle Enterprises in 2021".
The announcement shows that in 2021, 129 passenger car companies in China will produce and import 20.6482 million passenger cars, the industry average vehicle curb weight is 1,533 kg, and the average actual value of fuel consumption (WLTC operating condition) is 5.10 liters/ 100 kilometers, which is more than 15% lower than that in 2020, exceeding the annual fuel consumption target of 5.98 liters per 100 kilometers.
At the same time, among the 129 passenger car companies, 65 companies reached the standard for average fuel consumption of passenger cars in 2021, and 64 companies failed to meet the standard. The compliance rate exceeded 50% for the first time, compared with only 30% in the same period last year. 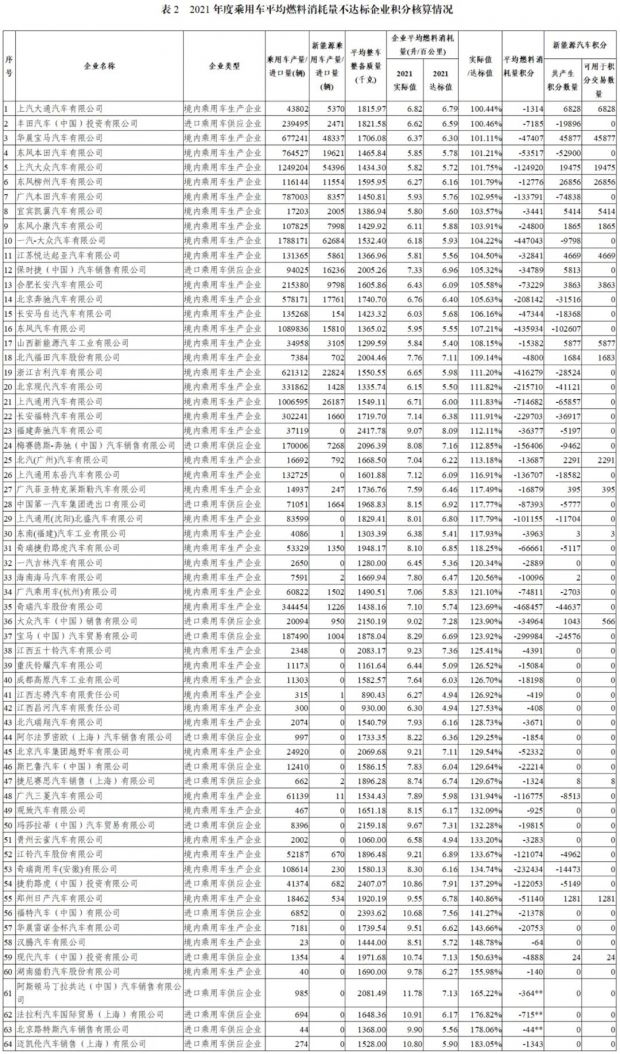 Specifically, Tesla and BYD are still big points, while the overall performance of self-owned brands is still better than that of joint ventures. Among them, SAIC-GM-Wuling (2.5472 million points) ranked first in the average fuel consumption rankings, and SAIC-GM became the bottom one (-714.7 thousand points). In addition, the average fuel consumption of many joint venture car companies such as SAIC-GM, FAW-Volkswagen, SAIC-Volkswagen, and GAC Honda failed to meet the standard. At the same time, joint venture car companies are also frequent visitors to the list of negative points for new energy vehicles.
In this regard, Cui Dongshu, secretary general of the Passenger Federation, believes that "the dual-point performance of joint venture car companies is relatively poor, mainly due to the small number of new energy vehicles." Judging from the proportion of sales in the entire domestic new energy market in 2021, joint ventures are in a relatively weak position compared with autonomy. Data show that in 2021, the penetration rate of self-owned brand new energy vehicles will be 27.3%, while joint ventures will only account for 2.6%.
Although the transformation of joint venture car companies is under great pressure, the improvement is that compared with previous years, the negative points situation has been significantly improved. First, the joint venture car companies are accelerating their transformation to new energy sources, and second, internal related transactions within the company have also become a way for the joint venture car companies to solve the problem of negative points. For example, SAIC-GM's average fuel consumption credits in 2021 decreased by 22.5% compared with the same period in 2020, and FAW-Volkswagen's negative credits also decreased by 62.1% year-on-year.
In addition to joint venture car companies, Porsche, Ferrari, Maserati and other luxury car brands are also well-deserved large negative points.
It is worth mentioning that on this double-point list, some self-owned brands are seriously substandard, such as Geely Automobile (-416,300 points) and Chery Automobile (-468,500 points).
In this regard, some analysts say that Geely’s failure to meet the standard is “mainly related to the slow transformation of its new energy”. The data shows that in 2021, Geely’s new energy sales will account for less than 10% of the overall sales, while Chery’s failure to meet the standard is related to the “new energy vehicle sector.” separation".
It is reported that the dual-point policy began in 2018, and two points of "fuel consumption" and "new energy" were established correspondingly to promote the rapid development of new energy vehicles. Enterprises that meet the standards will generate positive points, and those that fail to meet the standards will generate negative points. If the double points do not meet the standard, the company can achieve the standard by purchasing the points of other car companies. If the points are not reset to zero in time, the relevant car companies will not be able to sell their new cars.
As major points holders, Tesla and BYD (BYD Auto Industry Co., Ltd. and BYD Auto Co., Ltd.) have both obtained over one million points through the hot sale of new energy vehicles, reaching 1,401,700 points and 1,655,600 points respectively. It is worth mentioning that the increase in profits by selling points is an important means of making a living for the new forces with "insufficient blood production", and Tesla also once won the title of "charcoal seller". Calculated based on the average transaction price of new energy vehicle credits in 2021 of 2088 yuan/min, if BYD and Tesla sell all the credits in their hands, they can make profits of 3.456 billion yuan and 2.926 billion yuan respectively, while the one with the most negative credits can make profits of 3.456 billion yuan and 2.926 billion yuan respectively SAIC-GM needs to pay 1.492 billion yuan to buy points.
The data shows that in 2021, new energy points will be traded at 5.24 million points, a year-on-year increase of 144%, and the total transaction volume will reach 10.94 billion yuan, a year-on-year increase of 322%.
According to the forecast of the Ministry of Industry and Information Technology, considering the carry-over of previous points, it is expected that the supply of positive points will be abundant in 2022. However, with the follow-up fuel consumption regulations and credit assessment requirements being tightened, and the superimposed trend of large-scale vehicles, the follow-up credit supply and demand may move towards a tight balance.
According to Guo Shougang, deputy director of the First Division of Equipment Industry of the Ministry of Industry and Information Technology, "my country's new energy vehicles have entered a new stage of large-scale and rapid development, in order to meet the needs of the new stage. The Ministry of Industry and Information Technology will work with relevant departments to optimize the point management mechanism and promote the "Points Measures" in the Play a greater role in promoting carbon emissions and high-quality development of the auto industry."
It is reported that the proportion of new energy points in 2021-2023 has been revised to 14%, 16% and 18%. The requirements for the proportion of new energy vehicles after 2024 will be announced separately by the Ministry of Industry and Information Technology.